DISCLAIMER: Please note the the results published are still unofficial results from polling units across Edo State, only INEC have the right to collate and announce official election results.

The APC national chairman said he was satisfied with the process and security arrangement. He denies knowledge of alleged inducement in some polling units in Oredo.

The governorship candidate of the All Progressives Congress, Godwin Obaseki, and his wife, Betsy, have completed their accreditation and voted in the ongoing election in the state.

Obaseki and his wife, who were registered at Ward 4, Unit 20, Emokpae Primary School, in Oredo Local Government Area, arrived at about 9:35am for accreditation and voting.

Our correspondent gathered that there was a large turnout at Obaseki’s ward, Oredo Ward 4, which has 10 polling units.

Obaseki and Peoples Democratic Party candidate, Osagie Ize-Iyamu, are considered the leading candidates in the governorship race although a total of 19 candidates are vying for the position.

The election, which is being held under tight security, comes after a bitter campaign during which both candidates and their parties engaged in a war of words, accusing each other of working to manipulate the process. 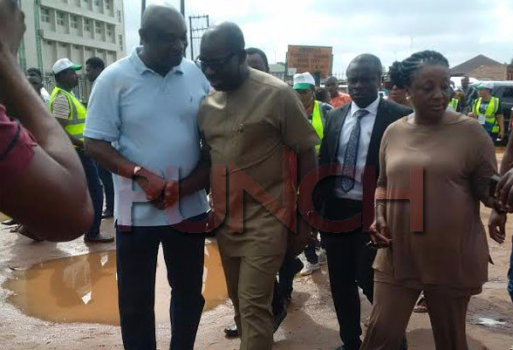 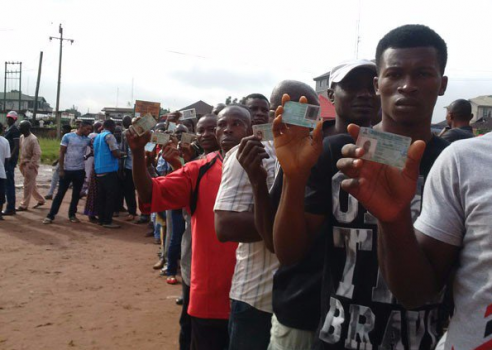 At PU 001 in Asoro Primary School, Benin, a party agent attempted to tell people to vote for her party.

Eghosa Arase, a voter, said everything was fine until the agent began canvassing for her party.

“The election is going peacefully, but some certain things is happening, some other members of some party, they are trying to cause crisis though we’ve tried to bring everything down.

“When you want to canvass, you have to canvass at home before you come here.”

According to PREMIUM TIMES report, one of the major parties was giving out N2,000 to have people vote for its candidate.

80-year-old Alice Akpaha arrived at the polling unit with her temporary voters card and was told she couldn’t vote. 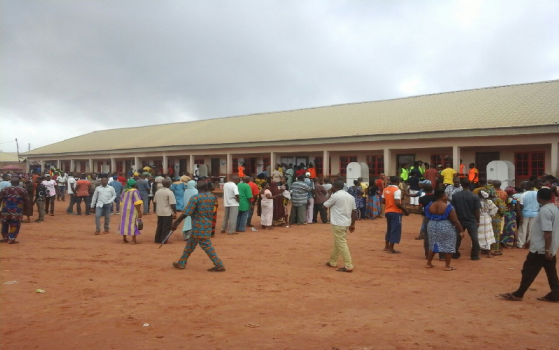 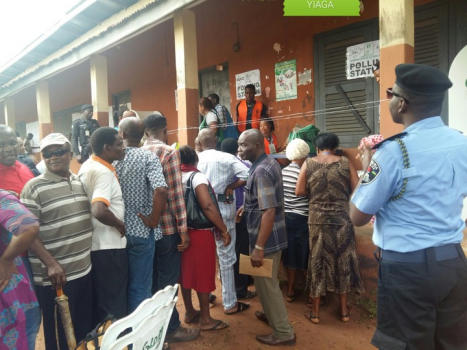 9:00am: Raymond Dokpesi of AIT spotted on the queue at ward 1 unit 8 Agenebode.

Voting material have arrived at Polling Unit 005 in Benin.

An INEC adhoc staff explains the voting process to prospective voters at a primary school in Benin.

“The process has changed. Now after accreditation, you vote immediately.

“Voting starts by 8 am and stops at 2pm. Those who are in the queue when it’s 2pm will be allowed to cast their votes.”

8:40 am: Accreditation and has started in unit 10, usen ward seven, Ovia South West

After a rigorous campaign to woo the electorates, voters in Edo State will, today, decide their next governor.

Nineteen candidates are vying for the ticket to the Government House. But the main contest is seen to be between Godwin Obaseki of the All Progressives Congress, the ruling party in the state, and Andrew Ize-Iyamu of the Peoples Democratic Party.

Seven political parties have women as their deputy governorship candidates.

A total of 25,000 police officers were deployed across the state to ensure peace and security during the polls, while 44 observer groups were accredited by the Independent National Electoral Commission as election monitors.

About Haruna Magaji 2469 Articles
Haruna Magaji is a journalist, foreign policy expert and closet musician. He is a graduate of ABU Zaria and a member of the Nigerian union of journalists. JSA, as he is fondly called, resides in Suleja, Abuja. email him at - [email protected]
Facebook