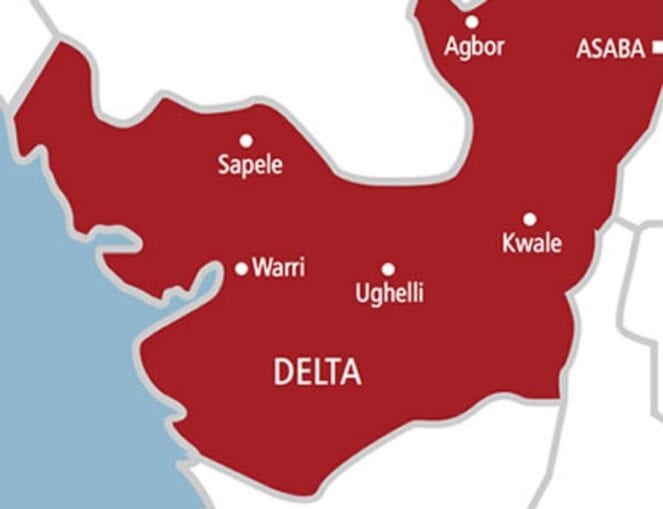 Chaos in Warri as Delta State registers first casualty over Covid-19 Lockdown – Delta State today recorded first casualty  in the novel COVID-19 not because anyone contacted the virus but because trigger happy soldiers gunned down one Mr Joseph Pessu in an attempt to enforce lockdown the city.

Reacting to the sad incident, the Itsekiri National Youths Council (INYC) has protested the killing by security agents for allegedly flouting stop and search order of the police on Thursday, calling for full investigation into the matter so as to bring those behind the act to book.

In a statement by the INYC President, Comrade Weyinmi Agbateyoniro, and the Group’s Secretary, Comrade Appearance Afejuku, the INYC expressed shock at the killing, explaining that the said Itsekiri youth was killed by a trigger-happy armed soldier and not because he flouted any laws.

The statement reads: “The attention of the Itsekiri National Youths Council (INYC) and its President Comr. Weyinmi Agbateyiniro, have been drawn to the gruesome killing of one of his members by men of the Nigerian Army at Ada Val Arenyenka Street, Ugbuwangue earlier this morning in Warri.

“The Council gathered that Late Mr Joseph Pessu, a law-abiding citizen and committed member of the INYC was racing through NPA Expressway to pick his sick father to the hospital when men of the Nigerian Army flagged him down.

“Before he could apply his brakes, one of his tyres was deflated. He managed to negotiate into the nearby Ada Val Arenyenka Street. As he alighted from his car to query why he was shot at, one of the gun-wielding officers shot him at close range. Mr. Joseph died on the spot.

“The INYC is using this medium to call on the Delta State Government and the Nigerian Army to fish out the recalcitrant and blood-thirsty Army officer who used the excuse of the Covid-19 Lockdown enforcement to murder a defenseless citizen of the Federal Republic of Nigeria.

“We demand justice for late Joseph Pessu. We want the murderous officer to be apprehended and punished according to the dictates of the law. Otherwise, we may not be able to manage the events that will happen hereinafter especially in this period of Lockdown”, the group added.

Meanwhile the incident has led to a breakdown of law and order in the metropolis as residents in their numbers deployed for mob action against law enforcement agents in Warri.

The Delta State Government has urged the public, particularly Deltans, to discountenance video clips purportedly on Warri residents defying the stay-at-home order of the state government over the Coronavirus pandemic and confronting security operatives, saying it was concocted and therefore, fake.

The Commissioner for Information, Mr. Charles Aniagwu, made the call in a statement on Friday in Asaba and said that the concocted videos were not a true representation of happenings in Warri or any part of Delta in the last 48 hours.

According to him, the videos in circulation are figments of the imagination of a few disgruntled elements bent at pitching the people against the state government.

Aniagwu stated that the purported video of two military personnel threatening the residents of Warri was an arrangement of those who didn’t want the peace of the state, adding that the video was not a true representation of Nigerian military officers who knew the implication of threatening citizens with such an illicit video.

He added that the military command whose responsibility it was to deploy personnel, had debunked the video material.

The commissioner, therefore, called on the public, especially Deltans, to disregard the video as it was the machination of those bent at causing disaffection between Deltans and military authorities.

“Let me thank Deltans for their cooperation so far and urge them to discard the concocted videos aimed at causing disaffection between the military and Deltans.

“There is no report of killing of soldiers in Warri or any other part of Delta”.

“The concocted videos were aimed at causing disaffection between Deltans and the security agencies carrying out lawful duties”.

“While we appeal to our people to remain law-abiding, it is imperative to state that videos trending in social media are not a true reflection of happenings in the state”.

“We, therefore, call on our people to discard the videos and continue to remain indoors as directed by the government to enable us to curb the possible outbreak and spread of the COVID-19 pandemic in the state”.

“As a government, we will continue to appeal to the security agencies to apply rules of engagement as practiced in most democracies as they carry out their lawful duties,” he added.