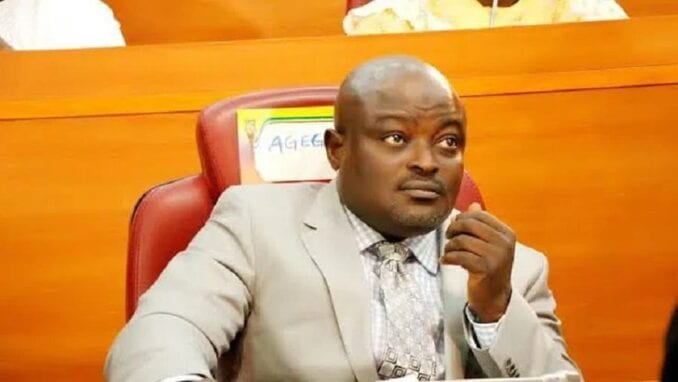 Obasa: The Phoenix shaping Lagos one law at a time – Eleven years ago, sometime around October, members of the Aba State creation movement paid a courtesy call to the Lagos State House of Assembly. The purpose of their visit was to get the buy-in of the assembly on their agitation for the creation of Aba State from the present Abia in view of the ongoing constitutional amendment.

While they made a strong case for their cause including invoking historical agreements dated far back to 1915, members of the Assembly told them in clear terms that their cause should be reviewed and that they were better of with Abia State for the time being.

But in the midst of all this, the contribution of one member of the Assembly resonated around the entire Chamber. Honourable Ajayi Mudashiru Obasa from Agege State Constituency implored members of the chamber not to totally discard the agitation of the group on the basis of the economic viability of the proposed State as States which were presently classified as nonviable are posters of leadership defect as every State can become productive and buoyant with the right leaders in power.

Even though that opinion was unpopular, it signposts the mindset of the House of Assembly member as a genuine builder of institutions who believes in ingenuity as a precursor for development and that anybody can grow with the right guidance. This was the mindset that built the Emirate of Dubai!

It is therefore not shocking that a few years after, Honourable Obasa was elected as the Speaker of the State House of Assembly and shortly after, as the Chairman of the Conference of Speakers of Nigeria.

But being foresighted is not the only attribute of this legislator; the records of his strides in the hallowed chamber point to the brilliance and wisdom he has devoted to shaping the mega-city of Lagos.

At a time when the city of Lagos was thrown into unrelenting attacks from various groups of hoodlums and the Nigeria Police Force was overwhelmed, Rt. Honourable Obasa formulated a community policing structure cleverly whipped to ensure it doesn’t conflict with existing laws that disallow State Police.

The Neighborhood Watch Bill which was passed and birthed the Lagos Neighborhood Safety Corps (LNSC) remains a legislative masterpiece in Nigeria that has become the darling of other States. Apart from the carefully drafted model that retains policing in the exclusive legislative list, the local structural approach which the law came with, legitimatized community policing and unburdened the Nigeria Police Force by bringing on-board youth within the community with a better understanding of the terrain into security and neighbourhood safety while still giving them employment.

Many, sometimes, wonder why the rate of kidnapping in Lagos State has reduced over the last few years in comparison with some other States and consideration of its population – which should normally be an enabler for vices.

The answer is simple.

In 2017, Lagos State House of Assembly passed a bill proposed by Rt. Honourable Mudashiru Obasa to curb the rising case of kidnapping in the State. That bill which was later signed into law was called “Law to Provide for the Prohibition of the Act of Kidnapping and for Other Connected Purposes”. As expected of any progressive State, the bill took a drastic step towards ending the menace of kidnapping in the State by proposing a death penalty for kidnappers who kill their victims while those who engage in the act itself were liable to life imprisonment. Like a magic wand, the dreadful perpetrators of the atrocities vanished across the State.

Culture remains an indelible identity of any race, many things may give way for civilization but a race that keeps its culture defies extinction. The indigenous language of any given race or ethnic group is the sole connection to the culture of such a group. So when Rt. Honourable Obasa took the bold step to protect the cultural identity of Yorubaland in a mega-city of Lagos which some now categorize as “no man’s land”, the intervention became one of the most selfless by public officeholders.

The passage of the “Yoruba Language Preservation and Promotion” bill into law settled the identity crisis concocted by revisionists by resonating that Lagos State remains a Yorubaland and that the language can not be wished away. The compulsory teaching of Yoruba Language as a subject in Lagos schools as stated in the bill surely gladdens our forefathers.

In total, Rt. Honourable Obasa has sponsored at least six legislative pieces as Speaker. All of which have shaped the city of Lagos.

The Cancer Institute Law which provides for the creation of an Institute that will aid the early detection of cancer, help in research and most importantly, help to provide prompt treatment is another bill forged by Rt. Honourable Obasa for the wellbeing of Lagosians.

But while making law remains his primary assignment, Rt. Honourable Obasa has continued to provide succour for his community and those in need. Thousands of youth are under his scholarship program across various Institutions of learning. He has continued to provide basic amenities to his constituency while his Trader’s Grant has helped to bring smiles to the faces of market men and women who have benefited greatly from it.

Like every man, he is not perfect but what he lacks in perfection, he makes up for in selfless service. Lagos State is lucky to have this one!