by Tosan Olajide
in ECONOMY
2 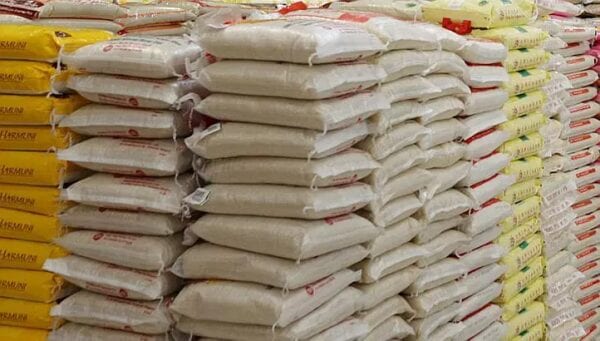 Despite import ban, foreign Rice dominates Nigerian Markets – Despite concrete and visible interventions of the Central Bank of Nigeria (CBN) via the Anchors Borrowers Programme (ABP) on the rice sub-sector of the Nigerian economy and the ban on the importation of the commodity, over seventy percent (70%) of rice in Nigeria markets are foreign or imported.

In a three-week survey on the rice market across the six geopolitical zones in the country, Economic Confidential team observed that foreign rice such as Mama Gold, Royal Stallion, Rice Master, Caprice, Falcon Rice and Basmati are sold alongside Nigerian rice namely: Umza and Fursa Crown from Kano, Mama Happy from Niger, Labana Rice from Kebbi, Olam Rice from Nasarawa, Abakaliki Rice from Ebonyi, Ofada Rice from Ogun State, Swomen Dama from Plateau, Lake Rice of Lagos/Kebbi States among others.

The Nigeria Customs service (NCS) and the CBN has reacted to the latest report.

The stakeholders in separate interviews laid the blame for the inflow of the banned commodity on the doorsteps of the Nigeria Customs Service(NCS), adding that for the federal government to make meaningful impact in its fight against smuggling of the commodity, serious attention must be paid to the various porous borders which the Nigeria Customs Service has the constitutional responsibility to man.

The development is coming almost four years after the federal government banned the importation of the commodity through land, sea and air.

On-the-spot checks by this intelligence magazine show the preponderance of foreign rice in these markets by merchants who said that profits coming from foreign rice far out-weigh the local rice whom majority of those interviewed believed has more nutritional value than the foreign rice.

Auwal Mukhtar a merchant in Singer Market Kano said: “There is more market for us in foreign rice because it’s cheaper.”

Nwadike said. ‘tell them to bring the cost of local rice down” he pleaded.

Another rice merchant Mustafha in Utako Market Abuja noted that “I try as much as possible to buy foreign rice because my customers prefer them and they are cheap’, he said.

Asked whether the quantity of local rice in the market more than the foreign rice is, they said no!

They were reluctant to disclose how they got large supplies of foreign rice.

One of them said: “Bros (short for brother) you want to spoil our business? How can we tell you the source of our business?”

The rice traders in separate interviews attributed the upsurge of rice smuggling to the ineffectiveness of customs service urging the government to take necessary steps to overhaul the Customs and its strategies to combat the menace.

When contacted, the spokesperson of the Nigeria Customs Service, Mr. Joseph Attah lamented the deadly activities of rice smugglers in Nigeria.

Attah said: “How much efforts are really enough. All our warehouses and available places are filled up with seized smuggled rice. The smugglers are becoming so deadly as a number of death have beeng recorded from our confrontations with them.

“In fact the Federal Government recently gave a directive that rice and other relief materials in the warehouses should be distributed to orphanages and Internally Displaced People Camps to address the plights of the victims as well as to free the warehouses.

“We now urge the major stakeholders to join us in the campaign against the deadly activities of smugglers through advocacy and sensitizations that will lead to attitudinal changes in the part of the smugglers.”

Also speaking on the same vein, the Central Bank Director of Corporate Communications, Mr Isaac Okorafor said while agreeing with many Nigerians that local rice has more nutritional value than foreign rice however disagreed with our survey that the quantity of foreign rice in Nigerian market far outweigh the local arguing that the apex bank through its intervention has put smiles on the faces of rice farmers and other stakeholders in the value chain .

“I don’t know the parameters used in your survey in terms of quantity of rice both foreign and local. But I can assure you that Nigerians would not like to go back to the dark days of rice importation”, the CBN spokesperson said.

However, late last year, Economic Confidential recalls that the federal government and the Central Bank of Nigeria (CBN) debunked the report by the United States Department of Agriculture World Markets and Trade that Nigeria imported three million metric tons of rice in 2018.

The US report had said the import figure is 400,000 metric tonnes higher than the quantity of the product that was imported in 2017.

The report also stated that Nigeria’s local rice production dropped from 2016 to 2018 compared to the situation in 2015.

Though government had claimed a reduction in the importation of the commodity, existing statistics should be a cause for concern as only Nigeria consumes parboiled rice while Benin prefers white rice, an indication that rice imported to Benin are being smuggled to Nigeria through the land borders.

Economic Confidential wholly agree that while legally imported rice continue to decline, majority of rice in the Nigerian markets are imported smuggled rice for which the country loses huge revenue that should have accrued to it. Despite the ban, smuggling of rice has continued to thrive as huge quantities of the commodity flood the local market daily.