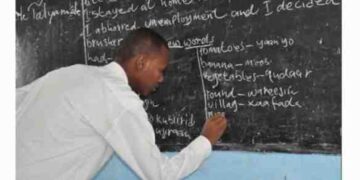 by Tosan Olajide
in LATEST NEWS
7

Briefing newsmen on the outcome of the State Executive Council’s meeting, the Commissioner for Education, Prof. Uche Eze, disclosed that the basic requirement for the recruitment is National Certificate of Education (NCE), adding that the candidates must have teaching background and would accept to reside and teach in the rural communities. He stressed that Gov. Ugwuanyi, through his grassroots development initiatives, has provided in the rural areas, some amenities that attract people to urban centres.

It would be recalled that Gov. Ugwuanyi’s administration had recruited over 4000 teachers since its inception, to create jobs and improve the standard of learning in the state.

According to Prof. Eze, “His Excellency is committed and determined to ensure that teachers continue to be available at the basic education level so that our children will benefit from the investment that the state government is making in the education sector”.

He explained that “a good number of our teachers at the primary school level have retired and some lost to death”, noting the recruitment exercise was to fill the vacuum created to ensure availability of teachers at the classrooms for effective teaching and learning.

Consequently, the education commissioner further disclosed that “the council directed ENSUBEB to make arrangement for the recruitment of additional one thousand five hundred teachers to ensure that those who are qualified are appropriately placed so that our children will continue to benefit”.

On IMT, Prof. Eze stated that the fund was approved sequel to a presentation by the Governing Council and management of the institution, which informed the EXCO of the need for the re-accreditation of the courses on the premise that “when a course is accredited, after five years, that course needed re-accreditation”.

He maintained the approval was in line with Gov. Ugwuanyi’s interest in ensuring that IMT is repositioned.

His words: “You will recall that since the inception of this administration, His Excellency has invested so much in IMT because he believes that IMT is the prime institution in this state and that he has to do whatever it takes to make sure that he brings IMT back to its former glory.

“You will also recall that last year about N1 billion was invested in infrastructural development. He also released funds earlier for the accreditation but because accreditation is a continuous process, as the programmes expire, a re-accreditation is expected. This is why, His Excellency, at the State Executive Council’s meeting, saw it as very important to ensure that courses are re-accredited in IMT”.

In her briefing, the Commissioner for Gender Affairs and Social Development, Hon. Princess Peace Nnaji, stated that the state government approved the establishment of 12 courts (lower and high courts) to deal with issues that concern the implementation of the Child Rights Law.

Princess Nnaji added that the council also approved the appointment and inauguration of formidable men of integrity in Enugu State as members of a committee that will drive cases that are related to adoption and fostering in Enugu State, in the newly approved courts.

She further revealed that the present administration, through the Committee on Adoption and Fostering headed by Archbishop Emmanuel Chukwuma, has recorded tremendous achievements in curtailing the excesses of child trafficking, illegal adoption and baby factory, saying: “Before the Governor of Enugu State came into office as governor, issue of child/baby factory was everywhere in the state”.

The gender affairs commissioner said the governor through the council has equally approved that “we will have meeting with all the hospitals in Enugu State to make sure that they key into what we are doing”, under the corporate social responsibility act.

She pointed out that the adoption committee through the instrument of the government was “able to stop the nefarious activities that were going-on at the New Artisan Market, Enugu where children are being trafficked, sold and engaged in prostitution”, stating that her ministry is working with the Ministry of Education to organize seminars and workshops to talk to teenage girls in secondary schools against lesbianism, prostitution, pornography, etc.