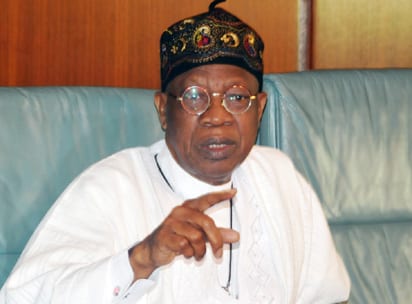 BREAKING: FG announces plans to arrest Nnamdi Kanu’s collaborators – Following preliminary forensic investigation, the Federal Government said it will soon go after all the collaborators of detained leader of the Indigenous People of Biafra, Mazi Nnamdi Kanu. It said any backer, no matter how highly-placed, will be dealt with.

The government said it already has a trove of Information on Kanu’s allies. It also clarified that some countries and intelligence agencies, with which it has obligations, assisted to arrest Kanu.

But the government did not name the affected countries or intelligence agencies.

It, however, assured of fair trial for Kanu.

The Minister of Information and Culture, Lai Mohammed made the government’s position known at a briefing a few minutes ago in Abuja.

But Mohammed, who looked calm unlike when the security challenges overwhelmed the country, refused to entertain any question.

Prodded by newsmen to fill in some gaps, Mohammed who spotted a grey Babanriga, quietly walked away.

A source said for security reasons, his brief was restricted.

But he gave some snippets on the ongoing investigation of Kanu in the last four days.

He said: “We can tell you that the forensic investigation carried out so far has revealed a treasure trove of information on the proscribed IPOB leader and his collaborators.

“While the investigation continues, we assure you that none of the collaborators, irrespective of their standing in the society, will be spared.

“They will all face the full wrath of the law for their activities that challenge our nation’s sovereignty and threaten its unity.

” No one, no matter how highly placed, is bigger than the country.”

He opened up on how Kanu was arrested in collaboration with some countries and international agencies.

He only described those countries and Intelligence agencies as those with which Nigeria shares obligations.

He said: “Finally, there have been speculations on how this re-arrest was pulled off and in which country the hitherto fugitive leader of the proscribed IPOB was nabbed.

” What we can tell you, once again, is that the re-arrest was made possible by the diligent efforts of our security and intelligence agencies, in collaboration with countries with which we have obligations. We continue to respect and honour the obligations. ”

He said Nigeria had been on the trail of Kanu for two years.

He said: ” It will interest Nigerians to know that for over two years, our security and intelligence agencies were on the trail of the proscribed IPOB leader as he lived a five-star life across several countries, travelling on chartered private jets, living in luxury apartments and turning out in designing clothes and shoes.

” Of course, as we all saw, he was wearing an attire made by Fendi, a luxury Italian fashion brand, when he was arrested.”

Mohammed explained that many security agencies worked to effect the arrest of Kanu.

He added: “As you are aware, the leader of the proscribed Indigenous People of Biafra (IPOB), Mr. Nnamdi Kanu, has been rearrested and repatriated to Nigeria to resume his trial.

” This was made possible through the collaboration of Nigerian security and intelligence agencies.

” Kanu, who is facing an 11-count charge of treason, treasonable felony, terrorism and illegal possession of firearms, among others, jumped bail in 2017 and left the country.

” On Tuesday, Kanu was re-arraigned in court and ordered to be remanded in the custody of the DSS, while the case was adjourned till July 26-27, 2021

” Gentlemen, the Federal Government wishes to commend the Nigerian security and intelligence agencies, who collaborated to re-arrest the proscribed IPOB leader in one of the most classic operations of its type in the world.

” We commend the professionalism, diligence, patriotism and painstaking efforts of our security and intelligence agencies.

” We also thank the sister international agencies that collaborated with us to pull off this arrest.”

Mohammed assured all those seeking justice for Kanu that the suspect will get a fair trial.

” It is interesting that many are suddenly calling for a fair trial for Kanu as if he didn’t get one before he decided to jump bail and flee. “However, I can assure you that the fair deal that Kanu denied many of the victims of the violence which he willfully instigated through his broadcasts and tweets will not be denied him.”