Unidentified foreigners flood FESTAC Town as residents live in fear – There is palpable tension in FESTAC Town, Lagos state in Nigeria over influx of unidentified men disguised as “Okada” riders, petty traders and truck pushers, at least this is what they appear to be during the day but at night their mission is beyond the comprehension of residents.

Last week, a motorist in Festac Town hit an okada rider, he was trying to negotiate a turn, while signaling with his blinker. Unfortunately the motorcycle rider was going too fast, and did not know his road signs. The result was an accident which damaged both car and motorcycle, and injured both rider and passenger.

Before the driver of the car could come out of his car and offer assistance to the injured, about fifty okada riders appeared out of nowhere and descended on the driver, screaming for his blood and chanting Islamic slogans. As onlookers stared, the okada mob beat the driver of the car senseless and damaged his vehicle. He only escaped with his life after he parted with N35,000.

In December 2019, a woman was making a turn into her compound, when a crazed okada rider came out of nowhere and ran into her car. When she came out of her car to assess the damage, a mob of okada riders attacked her and tore her clothes. By the time help came from people in the area, her purse and phone had been stolen and her children watched in horror as their mother was beaten and fondled by okada hooligans. This is becoming a regular occurrence in and around Festac area. 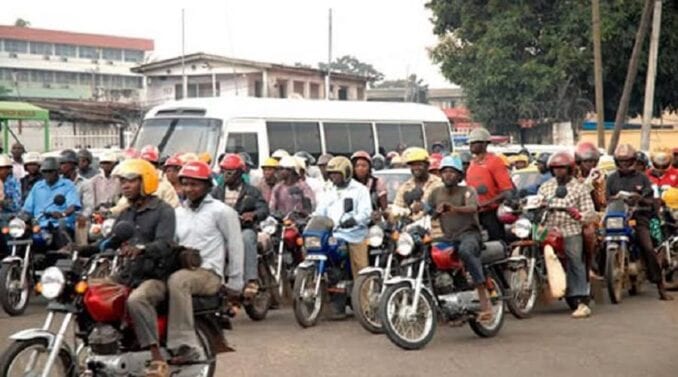 Who are these okada riders? Where do they come from? Why are there so many of them? How come we cannot identify them? Where do they sleep at night? These are questions we have to ask ourselves, and appeal to our government and police to answer. In the last one year the influx of northerners parading as commercial bike riders, trash packers, vendors of tomato, fruits and vegetables, shoemakers, tinkers (garuwa paper), and other petty items vendors is alarming.

These men come to Lagos in droves and settle wherever with no identification, no address, no documentation. Nobody knows their real names; where they come from, or how to monitor them. They parade around as cart pushers and steal drainage covers and man-hole covers, leaving gaping holes in the road.

They steal generators and air conditioning units from houses and flats, and under the guise of bike riders, they rob innocent men and women at night or in the early mornings. You cannot catch them because they have no identity and no one seems to know them.

What you may find most alarming is this; they know you. They know where you live and how many children you have, but you know nothing about them. Most of them are not even Nigerian! They come from Niger and Chad and sleep outside your streets or roam around at night looking for what to steal. I overheard a group of them joking that if any of their members is killed, they will spill blood before anyone knows what is happening. They did not know that I understand Hausa, so they spoke freely.

If you live in or around festac, please forward this message to everyone you know. It’s high time we check this massive invasion and force these people to identify themselves. Let 1966 and 1967 not repeat again, because these men all carry weapons and are just waiting for a signal to use them.

Before my very eyes a policeman at Mile 2 tried to impound a motorcycle for parking on the expressway, and a dozen of them drew daggers and threatened to stab him and his colleagues. This happened on Monday at Mile 2! We are in danger and we don’t seem to know or care. By the time this message gets to the LG Chairman and the State Governor, perhaps they will force these men to begin to carry ID or even reduce their huge numbers.

I am not a bigot, and I don’t have anything against any tribe. But I value the lives of my family and neighbors, and I don’t want to wait until something disastrous happens before I say something.

DISCLAIMER: This is an opinion content and those not represent the editorial views of FINANCIAL WATCH.

Do you need high paying jobs in Nigeria? If yes Submit your CV here and stand a chance of landing your dream job!

About Sam Gabriel 335 Articles
Samson Gabriel a graduate of mass communication from Auchi Polytechnic, he is a passionate writer with experience in radio scrip writing. He brings his experience from the broadcast media into play here as he continues to enjoy his passion as a journalist. He can be contacted via whats-app on: +234701105670