by Sam Gabriel
in LATEST NEWS
37 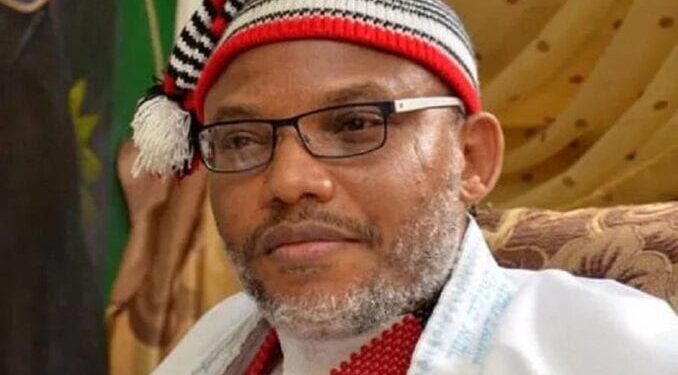 This is the summary of top 10 trending Nnamdi Kanu and Biafra news Today Tuesday, June 29, 2021.

Below are Nnamdi Kanu & Biafra news in Nigerian Newspapers today:

Lawyer to the FG, S. M. Labaran, said Kanu was arrested through intelligence and collaborative efforts of security agencies.

Labaran was silent on where and how Kanu was arrested.

Following Labaran’s ex-parte application, Justice Binta Nyako ordered that Kanu, who was brought to court in handcuffs and hooded before the court’s sitting, be remanded in the custody of the Department of State Services (DSS).

Justice Nyako granted an accelerated hearing by bringing the charge pending against him from the earlier adjourned date of October 20 to July 26 and 27.

At the conclusion of proceedings, the DSS operatives who brought him to court, sneaked him away, using the judge’s access stairs.

2) Nnamdi Kanu: Why I Jumped Bail, Escaped From Nigeria – The self-acclaimed leader of the proscribed Indigenous People Of Biafra, IPOB, Nnamdi Kanu on Tuesday, opened up on why he escaped from the country inspite of the criminal charges of terrorism and treasonable felony brought against him by the federal government

Looking heavily weighed down, Kanu, who was brought to court for the continuation of trial shortly after he was intercepted by security operations, sought the permission of Justice Binta Nyako to address the court and present his side of the story.

Upon the permission, Kanu told the court in the presence of heavily armed security operatives that his house was unlawfully invaded by security men with his life seriously threatened.

The self-acclaimed Biafran leader further alleged that he would have been killed along with others on the day of the invasion if not for the wisdom he applied to jump out of the country.

Kanu’s reaction was provoked by the federal government’s information through its counsel, Shuaib Labaran that Kanu jumped the bail granted by the court to escape trial by running out of the country.

Labaran had applied to the court for an order to remand Kanu in the custody of the Department of State Service (DSS).

3) Court remands Nnamdi Kanu, fixes July 26 for trial – The Federal High Court, Abuja, on Tuesday, ordered that the Leader of the Indigenous People of Biafra (IPOB), Nnamdi Kanu, be remanded a Department of State Service (DSS) facility, pending the determination of his trial.

Justice Binta Nyako gave the order after counsel to the Attorney General of the Federation (AGF), Shuaibu Labaran, told the court that the defendant (Kanu), who jumped bail, had been arrested and produced in court.

Labaran urged the court for an order detaining the arrested IPOB leader at the DSS facility pending the hearing and determination of the matter.

Justice Nyako, who granted the plea, adjourned the matter until July 26 for trial continuation.

However, no sooner had the judge ruled than Kanu indicated his interest to talk.

He told the court that he decided to go underground because his house was raided but he was able to escape.

Kanu said if he had not escaped, he might have been killed like other members of the group.

The judge, who advised him not to feel discomfiture to stand his trial, urged him to get across to his lawyer for the trial.

The News Agency of Nigeria (NAN) reports that Kanu was arrested on Oct. 14, 2015 on 11 count charge bordering on terrorism, treasonable felony, managing an unlawful society, publication of defamatory matter, illegal possession of firearms and improper importation of goods, among others.

4) Court Grants DSS Order to Remand Nnamdi Kanu Till July 26 – The federal high court in Abuja has granted a request by the Department of State Services (DSS) to remand Nnamdi Kanu, leader of the Indigenous People of Biafra (IPOB), till July 26.

The court granted the order on Wednesday morning when Kanu was re-arraigned on charges bothering on alleged treason.

Binta Nyako, the presiding judge, said he is to be remanded in DSS custody pending the determination of his trial.

Kanu appeared in court without his lawyer or any member of his defense team.

5) DSS Operatives Produce IPOB Leader, Nnamdi Kanu In Court – The operatives of the Department of State Service (DSS), on Tuesday, produced the Leader of the Indigenous People of Biafra (IPOB) before Justice Binta Nyako of the Federal High Court, Abuja.

Mr. Kanu, who was brought to the court amidst tight security, arrived at the court at about 1:40 pm.

However, all the entrances to the court have been under lock as the hearing in the matter is ongoing.

Ahamba who was reacting to the arrest of the IPOB leader Tuesday said the implication is that he was arrested and he will be tried.

“It will not increase the tense situation; all he needs to do is to defend himself. It will provide him the opportunity to tell his story,” Ahamba said.

He however advised the Federal Government to manage the situation well.

Ohanaeze in a statement made available to newsmen on Tuesday afternoon, praised the arrest of Kanu adding that it has brought an ‘end to violent agitations’ in the country.

The statement read: “Ohanaeze Ndigbo calls for calm and cautioned Igbos to desist from any form of protests and processions that will bring more catastrophe for Southeastern Nigeria.”

“The re-arrest of Nnamdi Kanu the leader of IPOB is the beginning of the end of violent agitations in southeastern Nigeria and a lesson to others that,” deviation from the nonviolent agitations and wasting of the innocent blood of the Igbo youths contradicted what Igbos are known for, and self-determination should not be used for purposes of fortune and fame-seeking”.

“Nnamdi Kanu’s refusal to adhere to the advice of Igbo leaders, Elders, and Political leaders is the outcome of what had befallen him, he made a lot of enemies especially those that would have saved him and Federal Government will never lose grip on him again. We don’t think that any Igbo leader will stick out his/her neck for him, his re-arrest will eventually bring peace and stability to the region and averted another civil war that was raging on.”

“Federal Government should handle the situation carefully because his large followers of Ipob wouldn’t resort to violent revolts, his trial should be strictly based on the laws of the land, they shouldn’t kill him because it will destabilize the entire country.”

Sowore, in a statement via his social media page on Tuesday, called on the Nigerian Government to release Kanu adding that agitations for self-determination is not a crime.

He wrote: “#FreeKanu Now! Asking for self-determination is not a crime!”

Leader of the group, Yerima Shettima in an interview with Independent shortly after the news of Kanu’s arrest broke, stated that pro-secessionist leader deserves no sympathy and should be severely punished.

“We understand that he was taken to court today and we demand for a speedy trial and he should be prosecuted immediately”.

“Nobody should sympathise with him. Sympathizing with him will not only do harm to Nigeria but it will be damage that one cannot even imagine. His case should serve as a deterrent to the likes of him who in future may want to behave the way he did.”

“He should be made to face severe punishment.”